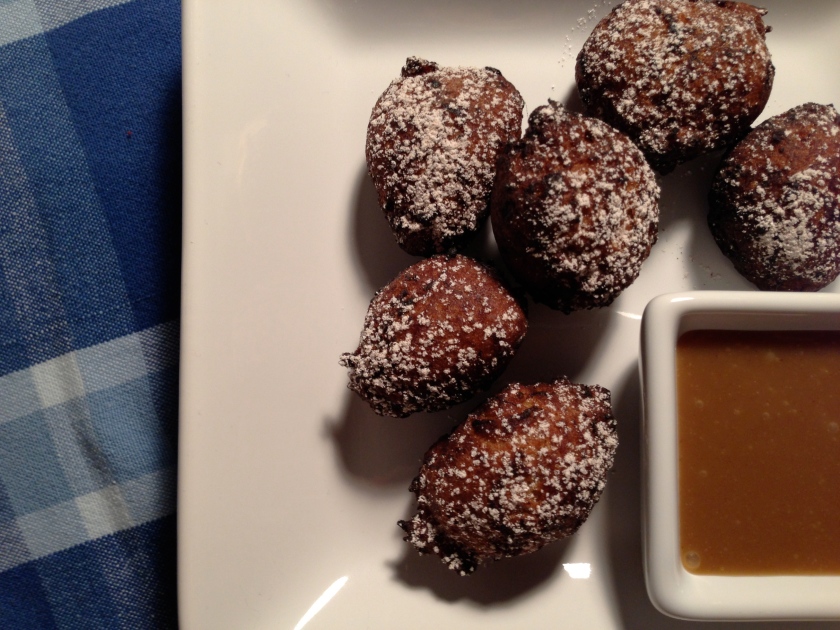 You may be surprised to know that in all of my baking adventures, deep frying is a brand-spankin’ new one for me.  Prior to this recipe, I had never attempted a doughnut, cruller, or fried treat of any kind.  It hasn’t been necessarily because I am frightened of hot oil, it’s just that…

This week’s recipe for Baked Sunday Mornings is a new twist on a classic, somewhat 1950’s-style dessert: Bananas Foster.  Traditionally, according to that ever-so-trustworthy source, Wikipedia (ha!), Bananas Foster is “a dessert made from bananas and vanilla ice cream, with the sauce made from butter, brown sugar, cinnamon, dark rum, and banana liqueur. The butter, sugar and bananas are cooked, and then the alcohol is added and ignited. The bananas and sauce are then served over the ice cream. Preparation of the dish is often made into a tableside performance as a flambé.”

Baked has turned this swanky dessert into Bananas Foster Fritters (from Baked Explorations), incorporating nearly all of the traditional ingredients listed above, including banana liqueur.  Thankfully, the recipe does not include a flambé presentation (I can picture my singed eyebrows even now as I type that), but it does include frying up some delightful little banana, rum, cinnamon, and allspice fritters in some pretty hot oil, paired with a luscious dipping sauce that is… well, something pretty spectacular.

A few things about this recipe to start:  instead of banana liqueur, I opted to use Baked’s suggestion to substitute vanilla extract.  I’m not a huge banana fan (I really only like it in baked goods), so buying even a small bottle of banana liqueur – were I successful even to find the stuff – seemed excessive for only the 2 teaspoons used in this recipe.  I also fried the fritters in canola oil rather than vegetable oil.  My suspicion is that you can use either, just be sure to keep an eye on your oil as you heat it, so it doesn’t burn.  I used a high-sided, cast-iron Dutch oven and attached a metal probe digital thermometer to gauge the oil temperature. 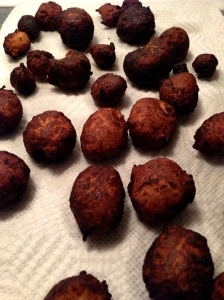 You can see the progression of my fritters in this photo – notice the more burnt fritters at the top?

The batter itself is very simple to make.  While I heated up the oil, I chilled the batter, which I somewhat regret doing – and you’ll see why.  Per the recipe instructions, I heated my oil up to 375 degrees.  When I scooped up the balls of dough and dropped them into the oil, they sizzled and crackled and burnt within seconds!  So – obviously, my oil was far too hot.  I was able to turn it down about 10-15 degrees, but I continuously flipped the fritters around in the oil with a pair of tongs as they were frying up, rather than letting them fry for “2-3 minutes on each side” as the recipe states.  I would say the length of time each fritter was in the oil was maybe 1 minute TOPS, turning constantly.  If I had let them fry for 2 minutes each side, they would have been extremely burnt and inedible.

I typically had 1-2 fritters in the oil at a time, which isn’t a bad idea, as you never want to overcrowd your skillet when frying.  Once done frying, I plopped them onto a cooling rack lined with 2 layers of paper towel to cool slightly and drain some of the excess grease.  None of my fritters were a nice golden brown.  Even with the precautions I took, most of them had some burn to them, which was unfortunate.  Given that this was my first time venturing into frying, I cut myself a little slack and playfully dusted them, as suggested, with a combination of powdered sugar and cinnamon.

Here’s the reason I think chilling the batter didn’t do the fritters any favors:  when I split open a fritter, the insides were still gooey and underdone.  I have a feeling that when the cold batter hit the very hot oil, the outside cooked up excessively fast, and to prevent them from completely burning, I needed to remove the fritters before they cooked all the way through. Bummer.  The good news?  The fritters contain no eggs, so even eating them underdone isn’t really a dangerous or bad thing – as it’s basically pureed banana and nothing unsafe.  It’s just a touch disappointing if you are expecting a typically fluffy, cakelike, doughnut-typical texture inside your fritters.  I did attempt making some smaller fritters to see if I could avoid the underdone texture inside, but even a few of these were gooey. *sigh*  I have a feeling that this is probably something that only gets improved upon with frying practice!

Thankfully, there’s a saving grace with this recipe, and it comes in the form of a delectable Rum Dipping Sauce that you will quick put together to serve with these fried bites.  It begins with dark brown sugar, melted together with butter and cream in a saucepan.  Add a couple tablespoons of dark rum and a teaspoon of vanilla, finished with a pinch of cinnamon: perfect. Delicious.  I seriously just stepped away from my computer and dipped my finger into the container I had in the fridge.  So good.  The fritters are incredible dipped in this sauce, capturing the very essence of Bananas Foster.  As Matt Lewis’s preface to this recipe suggests, this sauce is also a perfect accompaniment to pancakes or French toast.  If you want to see me extol the virtues of this sauce even further, you can watch me go a little crazy – maybe too crazy – over it in this video, where I elaborate a little further on my frying experience.  Enjoy. (and note that I started my intro a little earlier than the video began – no worries, you didn’t miss me saying anything other than “Hi from Neufangled Desserts!”)

And so, if you curious to know whether my fear of hot oil and frying has been assuaged, I can happily tell you: somewhat.  Like any new process in the kitchen, I’ve concluded it is craft that is perfected with practice, and I am not typically a huge fan of fried treats, so my practice will only come over an extended period of time.  I enjoyed the flavor and playfulness of these fritters, and will tuck this recipe away as one to attempt again should a curious desire to fry something up come over me.  If anything, I know that I will delightfully accept any excuse to cook up that scrumptious rum sauce again!  In the meantime, however, I think I fare better with Baked’s layer cakes, bar cookies, tarts and pies!

Get out the oil and make your own Bananas Foster Fritters by clicking on the recipe name (in purple) up above, which will link you to the Baked Sunday Mornings website.  Before you fry, check out how my fellow bakers fared!

9 thoughts on “Frittering away” 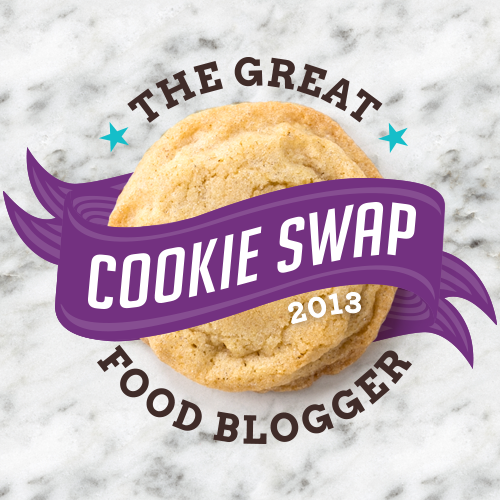 © Mark Neufang & Neufangled Desserts, 2013. Unauthorized use and/or duplication of this material without express and written permission from this blog’s author/owner is strictly prohibited. This includes recipes, photos, and all other original content. Excerpts and links may be used, provided that full and clear credit is given to Mark Neufang and Neufangled Desserts with appropriate and specific direction to the original content.
Loading Comments...
%d bloggers like this: